Brickipedia
Register
Don't have an account?
Sign In
Advertisement
in: Class 2 articles, Sets listed for ages 8+, 2019 sets,
and 4 more
English

75250 Pasaana Speeder Chase is a Star Wars set that was released on October 4, 2019 under the Star Wars Episode IX: The Rise of Skywalker subtheme.

During the war between the First Order and the Resistance, a skirmish broke out between First order troops and Poe Dameron, Rey, Finn, Chewbacca, and C-3PO on the desert planet Pasaana. The Resistance forces had been dispatched to Pasaana to search for clues leading to a Sith wayfinder that would lead to the forces of Darth Sidious on the hidden planet of Exegol. After arriving on Pasaana, they had started searching before Kylo Ren, lead there by a force vision he shared with Rey, arrived with multiple First Order troopers. The Resistance forces fled in two speeders after being led to a festival by Lando Calrissian, finding the lost ship of Ochi, a Sith sympathizer who had attempted to find and kill Luke Skywalker before being killed himself by a massive vexis. The Resistance forces encounter the vexis before Rey calmed and healed it using the force, where they retrieved a knife with the coordinates to the wayfinder and exited the underground passages. After exiting the passages they were located by Kylo Ren and his Knights of Ren, who abducted Chewbacca. Rey managed to destroy Kylo Ren's starfighter, and was forced to flee in the Millennium Falcon along with the rest of the crew, who later found and rescued Chewbacca. 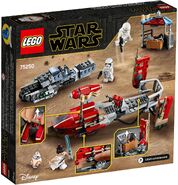