Brickipedia
Register
Don't have an account?
Sign In
Advertisement
in: Class 3 articles, Sets listed for ages 6+, 2020 sets,
and 5 more
English

75263 Resistance Y-wing Microfighter is a Star Wars Rise of Skywalker Microfighters set that was released on January 2, 2020.

The Comeuppance was a modified BTA-NR2 Y-wing starfighter owned by Zorii Bliss, leader of the Spice Runners of Kijimi. When Bliss escaped Kijimi before the Sith Eternal destroyed the planet on the orders of Darth Sidious, she took the droidsmith Babu Frik with her in the Comeuppance. She later joined up with the Resistance during the Battle of Exegol. 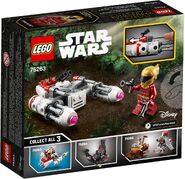