Brickipedia
Register
Don't have an account?
Sign In
Advertisement
in: Class 3 articles, Sets listed for ages 6+, 2020 sets,
and 5 more
English

75264 Kylo Ren's Shuttle Microfighter is a Star Wars Rise of Skywalker Microfighters set that was released on January 2, 2020.

An Upsilon-class command shuttle, also referred to simply as an Upsilon-class shuttle or a First Order Command Shuttle, was a multi-purpose transport utilized by the First Order as an armored shuttle for high-class dignitaries and top-ranking military officials. Armed with twin heavy laser cannons and advanced sensor suites, the Upsilon-class shuttle was able to monitor and scan enemy communications to effectively avoid hostile encounters. Inspired by decades of Imperial shuttle design, it mimicked the Lambda-class T-4a shuttle, and was upgraded with powerful technologies resulting from the acquisition of chief scientists following the collapse of the Old Empire.

Kylo Ren's command shuttle was an Upsilon-class command shuttle utilized by Kylo Ren, who was a member of the Knights of Ren and the First Order around thirty years after the Battle of Endor. His ship led a group of Atmospheric Assault Landers to the Star Destroyer Finalizer. 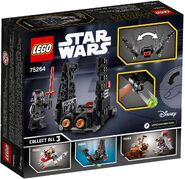