Brickipedia
Register
Don't have an account?
Sign In
Advertisement
in: Class 2 articles, Sets listed for ages 6+, 75000 sets,
and 3 more
English

75266 Sith Troopers Battle Pack is a Star Wars The Rise of Skywalker set that was released on January 2, 2020.

An army was used by the Sith Eternal in its push for the reconquering of the galaxy and the ultimate goal of ushering the return of the Sith Order. Their fighting forces were harvested in secret, with their existence unknown even to most of their puppet galactic power, the First Order. The army of the Sith Eternal was the culmination of an elaborate contingency that was meant to establish the everlasting reign of a new, resurgent Sith Empire.

The Sith Eternal's army consisted of a large number of legions of elite and loyal Sith troopers that drew inspiration from a dark and ancient Sith legacy. The army participated in the climactic Battle of Exegol, which saw the forces of the Sith Eternal, including a fleet—the Final Order—of Sith Star Destroyers, fight against the Resistance and the forces of the citizens' fleet which hailed from across the galaxy. The war on Exegol witnessed the final death of Dark Lord of the Sith Darth Sidious, the ultimate defeat of the Sith Eternal, and the uprising against the First Order. 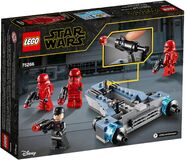