The set retired in Australia in mid-2021.

Ben Kenobi's home was the home of Jedi Master Obi-Wan Kenobi, who used the alias Ben Kenobi, on Tatooine. It was an abandoned moisture prospector's home located in the Jundland Wastes, situated on a bluff surrounded by the Western Dune Sea.

The house was built by mining prospectors from the Core Worlds who thought that Tatooine was rich in mineral wealth. A moisture prospector built it due to it's higher than average water condensation.

Shortly before the rescue of Han Solo from Jabba's Palace, Luke returned to the home and found some essential parts for his new green lightsaber. 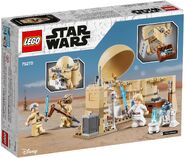