The X-34 landspeeder was a model of civilian landspeeder manufactured by SoroSuub Corporation and available during the Galactic Civil War between the Galactic Empire and the Alliance to Restore the Republic.

X-34 landspeeders were utilized as civilian transports perfect for traveling smoothly over even the roughest terrain. For this reason, they found use in harsh desert climates, and were in operation on the planet Tatooine during the Imperial Era. The farmboy Luke Skywalker owned an old and battered X-34 which he made extensive use of to travel through the planet's deserts, leaving the craft sand-pocked and sun-faded, and missing its portside turbine cowling. Skywalker kept the landspeeder in good working order with tinkering and careful maintenance, which proved essential in the desert environment. He sold the landspeeder in Mos Eisley for two thousand credits after the deaths of his aunt and uncle, Beru and Owen Lars, and used the money to help pay for transport to the planet Alderaan. Around this time, following the release of the XP-38, demand for X-34s had dropped in favor of the newer model. During the Galactic Civil War, the Alliance to Restore the Republic utilized X-34 landspeeders retrofitted with blaster cannons. 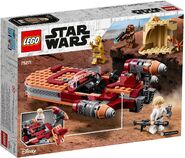