The TIE/dg starfighter, also known as the TIE Dagger or the Sith TIE fighter, was a type of Sith-affiliated TIE line starship that was forged in secret by forces under the command of the reborn Palpatine, along with the Xyston-class Star Destroyer, the AAL-2100/9.5 atmospheric assault lander, and other new technology created by the Sith Eternal.

The TIE/dg was a new generation of starfighter that saw use during the war between the First Order and the Resistance. It was one of the three ship classes used by the Sith Eternal, the others being the Xyston-class Star Destroyer and the AAL-2100/9.5 atmospheric assault lander. The TIE fighter was launched from hanger bays of the Xyston-class Star Destroyer, adjacent to the axial superlaser. This ship proved its excellence in dogfighting at the Battle of Exegol, as alongside the Star Destroyers that made up the Final Order, it nearly obliterated the Resistance. After Lando Calrissian and Chewbacca arrived with a fleet of starships, the Sith Eternal forces were defeated. 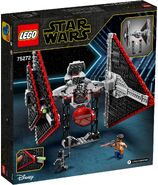 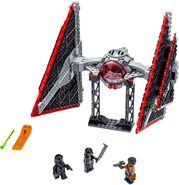