TIE pilots served in the Starfighter Corps of the Imperial Navy by piloting the various TIE Series starfighters. Distinguished by all-black flight suits and bulky, fully enclosed, vacuum-sealed helmets, the Galactic Empire at its height produced millions of TIE pilots and generally considered them expendable assets. The TIE pilots formed the elite of the Imperial Navy's Flight Branch.

The helmet design was reminiscent of stormtrooper armor, with a few notable distinctions. The shell was bulkier, possibly due to reinforced padding or internal pilot-to-ship communications equipment. Additional modifications enabled the pilot to survive in the cockpit's vacuum. Breather tubes extended from the helmet to the front of the breastplate, where controls for the suit's portable life support system were located. The actual supply of oxygen was built into the rectangular back plate of the armor. Because of the similarities of the helmets to stormtrooper armor, the official field manual for the Imperial Military, Imperial Handbook: A Commander's Guide had to specifically state that despite the similarities, the TIE pilots were part of the Navy, not the Stormtrooper Corps. However, despite the distinctions between the Stormtrooper Corps and the Imperial Navy branches, it wasn't unheard of for someone to be both a stormtrooper and a TIE pilot. 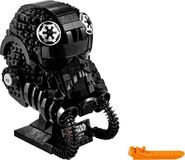