Stormtrooper helmets had a four-layer construction. The outer layer was made of plastoid composite armor, the next layer was an anti-blaster mesh, followed by magnetic shielding, and finally an inner insulator. Cellular padding helped prevent head injury.

During the height of the Galactic Empire, the standard-issue helmet included a rubber guard strip that acted as the border between the face and the cranium of the helmet. The cranium "shell" portion of the helmet was made of plasteel, and contained osmotic filter plates on the sides and back of the helmet. Various sensors, specifically those relating to threat targeting, were also incorporated into the helmet, although these were only active when its designated owner wore the helmet, as a security measure to ensure they could not be used by their enemies, as well as reducing the uniform's value on the black market.

The interior of the helmet's faceplate contained a voice-activator housing, and the user would speak via a ComTech sensa-mic. The same equipment also came with a dermal cross link. The equipment was between two Atmospheric transduction nozzles, which connected the Bliar filters to the atmospheric processing units. The ComTech vocoder altered the stormtrooper's natural voice into a more processed tone. Overall, the helmet featured the same plastoid composite as the rest of the armor, although it also incorporated an inner layer of magnetic shielding. The comlink used linked encoding sequences to rotate frequencies every few seconds while keeping all troopers in the unit synchronized. If a trooper's helmet was removed without the trooper first hitting the comlink's control stud (most likely found on the under-rim of the helmet), the frequency coding routine was automatically deleted from that helmet. 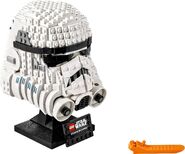