Boba Fett's helmet was a piece of his armor. Originally worn by his father, Jango Fett, the helmet was recovered by Boba and repainted along with the rest of the armor after Jango was killed by Mace Windu. Unlike standard Mandalorian armor, Boba's armor, and therefore helmet, was not made out of the ultradurable beskar metal that Mandalorian armor was traditionally made out of. Boba's armor was made out of durasteel, a far cheaper and common material that was nevertheless significantly less resilient. As a child, Boba used the helmet and attempted to assassinate Windu, but ultimately failed. Boba recovered the helmet, and wore it for several decades after. The helmet was a standard Mandalorian T-visor helmet, outfitted with high-tech sensors on the inside along with a comlink and a radar antennae. 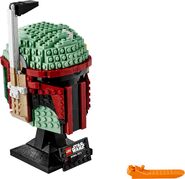 Promotional photo
Add a photo to this gallery