D-O was a droid that was once owned by the Sith assassin Ochi of Bestoon. The droid was created by a droidsmith, who was killed by Ochi. The droid was reactivated by BB-8 in 35 ABY, on Pasaana, and later brought along to Kijimi, where he was further repaired by Rey. An excitable little droid, D-O befriended the Resistance droid, and wanted to be just like his droid friend.

D-O spoke a less complex form of droid binary that was easier for non-droids to understand than most droid speech and was capable of speaking in Basic, though it was rather limited and often times garbled, with a noticeable stutter. 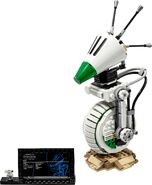