The Armored Assault Tank (AAT-1 or AAT) was a medium-sized repulsor tank used mainly by the Trade Federation and the Confederacy of Independent Systems prior to the rise of the Galactic Empire. The tank had heavy frontal armor that gave it the capability to plow through walls, and it was heavily armed with a payload of 57 shells. The tank required a crew of four battle droids to be fully operated and was able to carry six additional battle droids onto the battlefield. The tank's reactor and power and communications gear were kept in the rear for protection.

The vehicle was designed by the Baktoid Armor factories, with its most important parts placed in the back. Piloted by OOM pilot battle droids, AATs comprised a significant portion of the Trade Federation's ground forces. They were used to fight armies of pirates in the Outer Rim Territories before they were finally deployed in the Federation's Invasion of Naboo in 32 BBY. Ten years later they would be used heavily during the galactic Clone Wars between the Galactic Republic and the Confederacy of Independent Systems. Though AATs did see a little action after the Republic transformed into the Galactic Empire in 19 BBY, these instances were very rare. 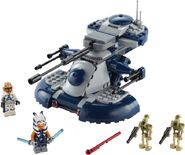 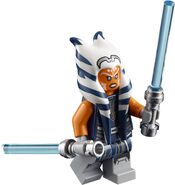