The Night Buzzard was a modified Oubliette-class transport used by the Knights of Ren. Originally a dungeon ship on Osseriton, a penal world in the Unknown Regions, the vessel was liberated by the Knights during a raid on the planet alongside many prisoners, becoming the home and transport for the Knights.

The Knights of Ren used the Night Buzzard to travel to Pasaana, where they captured an unsuspecting Chewbacca. They then followed Resistance members Rey, Poe Dameron, Finn, BB-8, and C-3PO to Kijimi, where they alerted their master, Kylo Ren. They were then called to Exegol, where the Knights were killed by their former leader, now redeemed as Ben Solo. 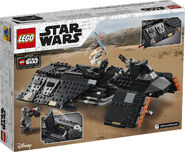