The Soulless One, a customized Feethan Ottraw Scalable Assemblies Belbullab-22 starfighter, was the personal ship of General Grievous, the leader of the Confederacy of Independent Systems' Droid Army. However, because Grievous used the fighter to retreat, some opponents nicknamed the ship Spineless One.

The Soulless One was reinforced with impervium alloy armor, and was equipped with a sensor jamming system and two rapid fire laser cannons. It was designed to be an upgrade to the CIS droid fighters, such as the vulture droid and the droid tri-fighters.

Grievous himself preferred hand-to-hand combat, although he still often flew the battle-worn fighter. After the General's death in the Battle of Utapau, Soulless One was taken by Jedi Master Obi-Wan Kenobi to escape Utapau after the execution of Order 66. Kenobi later docked it with the Tantive III. 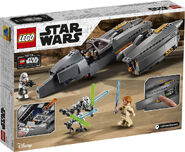