Brickipedia
Register
Don't have an account?
Sign In
Advertisement
in: Class 3 articles, Sets listed for ages 18+, 2020 sets,
and 5 more
English

Master Builder Series
75290 Mos Eisley Cantina is a Star Wars set that was released on September 16, 2020 for VIP members. It contains 21 minifigures.

Chalmun's Spaceport Cantina, also known as Chalmun's, Chalmun's Cantina, double-c/ceecee by the city militia, the Mos Eisley Cantina or simply The Cantina, was a popular drinking and dining establishment located in the city of Mos Eisley on the desert world of Tatooine.

The single-story building was constructed by Cedo Partu, an early pioneer and Mos Eisley town leader, as a fortification against Tusken Raiders. Changing ownership over the years, the building saw use as an armory, a brewery, and a flophouse for vagrants. Before the inception of the cantina, the site was occupied by B'omarr Monks and the Vriichon brothers, who, before the purchase by Chalmun, were running an illegal spice den on the site and burying bodies in the basement.

Identified only by a sign over the door reading simply "Cantina," the cantina was a popular gathering place for spacers and smugglers, and the center of a host of criminal activity in the spaceport of Mos Eisley, Tatooine. It was run by the Wookiee Chalmun, who purchased the building using gambling profits earned on Ord Mantell. The droid-hating Wuher maintained the bar during the day, and the cheerful bar wench Ackmena tended the place at night. Bouncers such as Tork would regulate the rowdy crowd, tossing out those who shot other patrons. 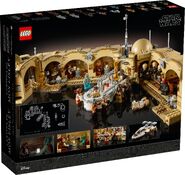