During the Battle of Endor, Luke Skywalker surrendered himself to Darth Vader on the ground of the forest moon of Endor in a hope to turn him to the light side. Escorted by Vader, Skywalker was brought to the Emperor's throne room in an attempt to turn him to the dark side, shortly before the Alliance Fleet arrived. After telekinetically releasing Skywalker from his binders, the Emperor dismissed his protectors, the Royal Guard, and revealed the extent of his plan to destroy the Alliance. Aware of Skywalker's anger and hate, the Sith Master tempted him to give in to his emotions and strike him down with his lightsaber.

In spite of his initial refusal to succumb to the Emperor's temptations, when faced with the imminent destruction of the Rebel fleet and the loss of his friends, Skywalker allowed himself to be coerced into a confrontation. Within the darkened confines of the Emperor's throne room, Luke engaged his father in a fierce lightsaber duel. Although Luke first fought Vader in anger, the Emperor's taunts made him realize that he was following the path Yoda had warned him against. Instead, he once again tried to reach his father, sensing conflict in him about his allegiance. However, Vader dismissed him and threatened to turn Luke's sister, Organa, to the dark side in his stead, something that enraged Skywalker, allowing him to draw upon his anger to overwhelm the Dark Lord. With one final strike, Luke severed Vader's cybernetic right hand, taking the Sith's lightsaber with it as it plummeted into the depths below. Pleased with Skywalker's display of power, Sidious ordered Luke to kill Vader before taking his father's place at the Emperor's side. Seeing at once what he would become if he failed to pull himself back, Skywalker tossed his lightsaber aside and declared himself a Jedi, as his father had been before him. Seeing how his son was being tortured, Vader turned to the light side, killing the Emperor and saving his son's life. 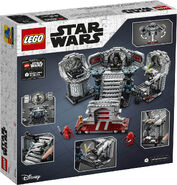