Brickipedia
Register
Don't have an account?
Sign In
Advertisement
in: Class 3 articles, Sets listed for ages 10+, Pages that link to Legopedia (Russian),
and 5 more
English

The Razor Crest was owned by Mandalorian bounty hunter Din Djarin, was built as a gunship military craft at some point before the formation of the Galactic Empire in 19 BBY, and was used to patrol local territories. The starship had two laser cannons, two engines, and a hyperdrive. It could be piloted by one individual and had room for two others. It also contained an astromech interface socket, however due to Din Djarin's distrust of droids, it has remained unused. A variety of equipment in the cargo hold could be found, including a vacc tube, a weapons locker, and a carbonite freezing chamber.

Prior to the rise of the Galactic Empire, it served as a military patrol craft. The vessel eventually fell into the hands of Din Djarin, who lived and worked from it as he hunted bounties in the Outer Rim Territories in the early years of the New Republic. He used it throughout the search for the child named Grogu, and continued to use it on the quest to find Grogu's species in 9 ABY. The Razor Crest was destroyed by a single shot fired by Gideon's light cruiser during a skirmish on Tython. 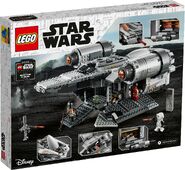 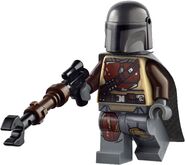