Brickipedia
Register
Don't have an account?
Sign In
Advertisement
in: Class 3 articles, Sets listed for ages 9+, 2020 sets,
and 4 more
English

The Intersystem Transport Ship, also known as the I-TS, was a class of transport ship used by the Resistance. The ship was built by Corellian Engineering Corporation and primarily used as a long-haul cargo and troop transport. It was equipped with forward and rear guns to defend against pirates. The vehicle was also equipped with a hyperdrive. The versatility of the vessel made it indispensable for the Resistance and critical for transporting troops between bases.

An individual I-TS designated Cargo vessel TR141 was once stationed at the Resistance encampment at the ancient ruins just outside of the Black Spire Outpost on Batuu, but was later captured by a First Order Resurgent-class Star Destroyer. 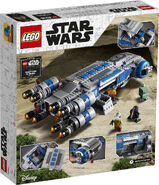