75295 Millennium Falcon Microfighter is a Star Wars set that was released in 2021. 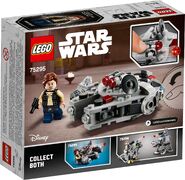 £8.99 +
Released
2021 +
ShopDescription
Give a young child an unexpected treat wit … Give a young child an unexpected treat with this LEGO® Star Wars™ Millennium Falcon Microfighter (75295). Based on the iconic vehicle’s design in the classic Star Wars trilogy, this awesome brick-built toy has 2 stud shooters and a LEGO minifigure seat. The set also includes a Han Solo LEGO minifigure with his blaster pistol so kids can role-play as the Rebel hero in their everyday playtime adventures.Easy to build<br>There are step-by-step instructions so even LEGO beginners can build independently. This construction model also combines perfectly with the AT-AT vs. Tauntaun Microfighters (75298) set for extra battle action.The LEGO Star Wars universe<br>Since 1999, the LEGO Group has been recreating iconic starships, vehicles, locations and characters from the Star Wars universe. LEGO Star Wars has become its most successful theme with a wide variety of building toys that make the best gifts for kids and fans of all ages.* Young children can role-play as the Rebel hero from Star Wars™ in their own stories with this quick-to-build LEGO® Microfighters version of the Millennium Falcon from the classic Star Wars trilogy.* The Millennium Falcon Microfighter (75295) features a seat for the Han Solo LEGO® minifigure and 2 stud shooters, for fun, creative play. Han Solo also has a blaster pistol.* This buildable playset combines brilliantly with the AT-AT vs. Tauntaun Microfighters (75298) set to open up even more play options.* Easy to build – and to rebuild after battles – this durable, 101-piece, building toy makes the best birthday present, holiday gift or fun surprise treat for creative kids aged 6+.* The Microfighter measures over 1.5 in. (4 cm) high, 3 in. (8 cm) long and 3 in. (7 cm) wide – a nice, compact size to slip into a child’s backpack ready for play on their travels.* Thinking of buying this set for a young Star Wars™ fan who is a LEGO® newcomer? No worries. It comes with illustrated, step-by-step instructions so they can build with confidence.* LEGO® Star Wars™ building sets are awesome for kids (and adult fans) to recreate scenes from the Star Wars saga, make up their own adventures and/or display the collectible construction toys.* Ever since 1958, LEGO® components have met the highest industry standards to ensure they connect consistently – no need to use the Force.* LEGO® components are dropped, heated, crushed, twisted and analyzed to make sure they meet rigorous safety standards. sure they meet rigorous safety standards.
Theme
Star Wars +
Title
Millenium Falcon Microfighter +
Txt1
Han Solo +
Type
Set +
USPrice
$9.99 +