Slave I, also spelled Slave One, was a modified Firespray-31-class patrol and attack craft used by the infamous Mandalorian bounty hunter Jango Fett before the Clone Wars and later his unaltered cloned son Boba Fett just prior to the Fall of the Republic and during the reign of the Galactic Empire. The ship in its original form was produced by a subsidiary company of Kuat Drive Yards, based on the planet Kuat. 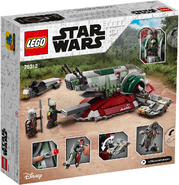