7573 Battle of Alamut is a 821 Prince of Persia set that was released in 2010. The set consists of a large model of the castle Alamut, as seen in the movie Prince of Persia: The Sands of Time. It includes two Alamut Guards, Dastan, Seso, Gool, Tamah, and Nizam minifigures. It also includes a camel, an animal that only appears in this and the 7571 The Fight for the Dagger set.

The set consits of the palace of Alamut, which is coloured white and gold. It includes the castle's main tower, as well as walls that can be folded out on either side. Above the entrance, there are barrel parts filled with translucent orange 1x1 cones to recreate the scene in the Prince of Persia movie where Dastan drops the barrels of oil onto the enemy. On the walls there are also golden flags, and studs on the sides for parkour play. In between the two sides of the walls, there is a large gateway for the minifigures to enter through. There is also one camel, a cart with a flick-fire weapon, and 7 minifigures.

The included Ballista cart features two flick-fire missiles, and only two wheels. The wheels are slightly armoured at the front, and the cart props itself up in the back.

The Gate into Alamut features a large double-door, framed by two towers, one on either side. The towers connect to the door (and each other) by means of a ramp at the top of the gate, which also connects into the ground. The top of the ramp features a tiltable stand, on which sit two barrels, that can be filled with "boiling oil" (transparent neon orange cones). At the top of each tower, there is a rotating catapult which can be used to launch bricks at the enemy. Next to a tower on either side, is a skinny white column, which, near its top, has a plant piece substituted for a column brick.
Next to the main doors are two torches, one on either side.

The right wall is about seven bricks high, and features, along its sides, bricks with studs on the sides, to recreate the scenes in the Prince of Persia film where Dastan runs along the walls. At the top of the wall, there is a small area where a minifigure can stand, and, inside the wall, there are tile bricks that can be pushed either way through it to create stairs down.

The left wall is very similar to the right, except for the lack of pushable steps, and the inclusion, instead, of a part of the wall that can be knocked out, to prevent Dastan running on it.
It should be noted that the gate and the walls all have TECHNIC studs included in them to attach to the main palace.

On either side, the palace features two large white pillars, with golden domes on top. On the roof, the palace has a large gold dome, as well as some plants.
Inside, the palace is divided into six rooms. On the first floor, the rooms on the left and right both contain white pedestals, one with a golden scorpion atop it, and one with two gold goblets. The middle room features a circular structure, possibly a well or small shrine, with a ruby placed atop it. By grabbing hold of the gem and pulling, the "roof" of the structure will come up, to reveal the Dagger of Time connected underneath.
On the second floor, one room features a throne room for Nizam, with a dark red/white throne with a gold decoration on top, and the other features a weapon storage area, where two axes are held. The middle room has nothing in it, but opens into a large balcony, which overlooks the whole of Alamut castle. On the set's box art, Nizam is watching the battle from this position.

Dastan has black legs, printed with a red sash and some silver ornaments. His torso is primarily brown, although he has nougat arms and hands. The torso is printed with what would appear to be leather armour, as well as some gold decorations, and a belt. His face has a confident expression, and he has stubble around his mouth, and on most of the lower half of his face. He has brown eyebrows and hair.

Seso has unprinted dark brown legs, and a dark brown torso with some leather armour and sashes printed on it. His face has a determined expression, and, like Nizam, he is bald.

Gool has dark blue legs, with no printing. His torso is printed with both dark and light grey, and depicts a pattern of heavy armour over chain-mail. His face has a displeased expression, several scars, and stubble and sideburns that run along the entire edge of his head. He wears a conical "metal" helmet.

Tamah has unprinted black legs, and a grey torso with blue leather armour with silver spikes printed on it. His arms are black, and his hands are, like those of most of the minifigures in the set, light nougat. He has a grinning expression and a raised eyebrow, as well as much stubble. He wears a large black turban, that covers most of his head, and the upper part of his torso.

The two alamut Guards are identical. They both have unprinted dark red legs, and dark red torsos with nougat hands, printed with armour, cloth, and a yellow sash. Their faces each have the exact same confident expression, with no extra details. They both wear the same conical helmet as Gool.

In the Prince of Persia: The Sands of Time movie, Alamut is a peaceful city state and a neighbor of the Persian Empire. The city is located in a valley with natural water resources, and is surrounded by fields and gardens. In the centre of the city are the royal palace and the sacred temple. The mystical Dagger of Time is stored in this temple. Alamut is a cultural and religious centre, a holy city. Unknown to most people, the real source of the mystical sands of time is in the catacombs under the city. This source is traditionally protected by priests and the Princess of Alamut. Probably due to its holy status, Alamut city has never been conquered by enemies for a thousand years. Most kings, including Persian King Sharaman, consider attacking the city to be an insult to the gods, and fear the destructive effects of such an act on the international relations of their states.
Alamut is protected by walls, and Alamut soldiers, who wear white and golden coloured uniforms. There are no widespread forges for mass production of weapons in the city.

After false accusations of weapons smuggling, supported by false evidence secretly fabricated by Nizam, the Persian Prince Tus decides to invade the city. During the capture, Persian Prince Dastan sneaks in the city and opens the gates to minimize possible losses on both sides. After a series of adventures following the assassination of King Sharaman, Dastan returns to Alamut with Seso, Sheik Amar, and Princess Tamina to stop Nizam, who now controls the city with the Persian army (or Alamut Guards), and Hassansins under his control.

All antagonist minifigures, Nizam, Alamut Guards and Hassansins are in fact Persians. The Battle of Alamut set contains no Alamut citizens or soldiers. From all the companions of Dastan, who came to the city with him at the end of the movie, only Seso is available in this set.

Alamut was a mountain fortress located in northern Iran. It was built in a way that made conquering it extremely difficult. In 1090, the fortress was infiltrated and occupied by Hassan-i Sabbah. He was the founder of Hashshashins Order, known in the West as "the Assassins". The Hashshashins were a small but influential faction during the reign of the Seljuk Empire and during the crusades. They were famous for assassinating important leaders of their enemies. 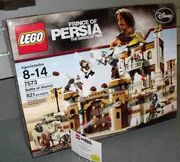 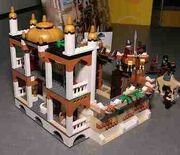 A digital rendering of Alamut
Add a photo to this gallery

Retrieved from "https://brickipedia.fandom.com/wiki/7573_Battle_of_Alamut?oldid=1871902"
Community content is available under CC-BY-SA unless otherwise noted.