Brickipedia
Register
Don't have an account?
Sign In
Advertisement
in: Class 1 articles, Sets listed for ages 7+, 2019 sets,
and 4 more
English

The McLaren Senna is a limited-production mid-engine sports car manufactured by McLaren Automotive. The car is the third addition in the McLaren Ultimate Series, joining the F1 and the P1; however, it is not a direct successor to either of the cars. The Senna was unveiled online by the company on December 10, 2017, with the official unveiling taking place at the 2018 Geneva Motor Show.

The car is named after the Brazilian Formula One race driver Ayrton Senna, honouring and giving tribute to his success with the McLaren Formula One Teambetween 1988 and 1993 Formula 1 seasons. Senna won three Formula One World Driver's Championship titles and thirty-five Formula One Grand Prix race wins with the team; McLaren also won four consecutive Formula One World Constructor's Championship titles with Senna as part of their driver line-up. McLaren Automotive holds the rights to the Senna family name along with the Instituto Ayrton Senna. The organisation and McLaren have made the Senna name exclusive to the car, thereby prohibiting any other company from using the name. 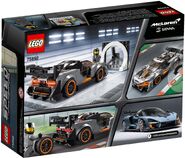