Brickipedia
Register
Don't have an account?
Sign In
Advertisement
in: Class 3 articles, Sets listed for ages 8+, 2019 sets,
and 3 more
English

Developed in parallel with the Mini Cooper and released in 1963, the Mini Cooper S featured a 1071 cc engine with a 70.61 mm bore, nitrided steel crankshaft, a strengthened bottom end to allow further tuning, and a larger servo-assisted disc brakes. British Motor Corporation's (BMC) Competition Department at Abingdon, Oxfordshire built specially prepared Mini Coopers and Cooper Ss to compete in international rallies and other motorsport. This department helped in ensuring the Mini's huge success in motorsport throughout the 1960s, particularly the victories in the Monte Carlo Rally in 1964, 1965 and 1967, the 1000 Lakes Rally in 1965, 1966 and 1967, the British Rally Championship in 1962, 1963 and 1970 and the European Rally Championship in 1965 and 1966.

The John Cooper Works Buggy is a rear-wheel drive offroader developed by German rally team X-Raid for cross country racing. It is based on a tube-frame chassis covered by a carbon-fiber kevlar composite body. The powertrain is a turbocharged three liter BMW diesel engine featuring 345 hp (257 kW) and 590 ft·lb (800 N·m) of torque. 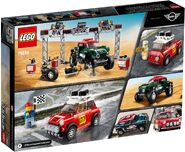