Woody and Buzz to the Rescue

The set re-enacts a scene from the first Toy Story movie. RC has a pull-back motor.

Near the end of the first film, Buzz Lightyear and Woody escaped from Sid's house. But they had to catch up with the moving van. Before they could both board the moving van, Sid's dog, Scud, attacked Woody and tried to take him away. Buzz jumped from the truck and fought Scud back. Woody got into the van and tried to use RC to get Buzz back from fighting Scud. The other toys think Woody is trying to 'kill' RC like he did Buzz, so they throw him off the moving van, but get a surprise when Woody, Buzz, and RC race up behind the truck. The other toys try to get them onto the truck, but RC's batteries wear out, leaving all three stranded. Woody and Buzz Lightyear soon notice the "The Big One" rocket taped to Buzz's back. They light it and use it to catch up to van. But the rocket sends Buzz and Woody skyward, sending RC straight into the back of the truck. Just before the rocket explodes, Buzz Lightyear spreads out his wings, and found out that he could fly after all. He and Woody then plant themselves in Andy's van, where a jubilant Andy finds his favorite toys once more. 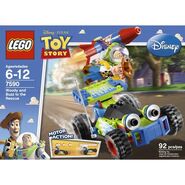