7592 Construct-a-Buzz is a constructible action ("constraction") figure of Buzz Lightyear released in 2010 in the Toy Story theme. It features poseable legs and arms, retracting wings, a visor that can open and close, and a flick-fire missile to represent the character's laser. The head is a single molded part attached to the model by a TECHNIC beam. Like the partner set 7591 Construct-a-Zurg, the set includes an Alien minifigure. 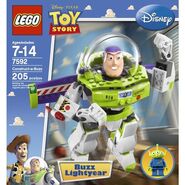