75987 Omnic Bastion is an exclusive Overwatch set released in 2018.

Originally created for peacekeeping purposes, Bastion robot units possessed the unique ability to rapidly reconfigure themselves into an assault-cannon mode. But during the Omnic Crisis, they were turned against their human makers, forming the bulk of the omnics' rebel army. Following the resolution of the crisis, nearly all of the remaining Bastion units were destroyed or disassembled. To this day, Bastion units still symbolize the horrors of the conflict.

Bastion was programmed with the mission to attack Stuttgart alongside many other Bastion units, but it was severely damaged during the fight. It lay dormant in the Black Forest near Eichenwalde, forgotten for over a decade. 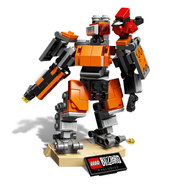