Brickipedia
Register
Don't have an account?
Sign In
Advertisement
in: Class 2 articles, Sets listed for ages 6-12, 76000 sets,
and 6 more
English

The Bat vs. Bane: Tumbler Chase

76001 The Bat vs. Bane: Tumbler Chase is a DC Universe Super Heroes set inspired by The Dark Knight Rises film released in 2012. The set itself, however, was released in 2013.

The Tumbler is mostly coloured brick yellow (often called tan or cream). The wheels in the front are grey with moderately sized, black tyres. On either side they are guarded by a slope, flap and between them is a slope brick leading up into the main vehicle with a sticker of Bane's mask. A darker tan, plate angled outward is placed on top and two orange lights are to either side. Another small, brick yellow slope is placed on top of the plate which guards the transparent brown windshield. To the sides of the windshield are dark tan slopes which morphs into the slopes on the sides of the Tumbler's cabin, which is briefly interrupted on both sides for windows. The top of the cabin has a cover which can be pulled up to insert Bane behind the steering wheel. There is another sticker depicting Bane's mask on the cover. On the rear of the Tumbler are two angled flaps. Below the flaps is a fold-up TECHNIC piece on each side which reveal flick-fire missiles when raised. The wheels are to the outer sides of the flick-fire missiles. While the wheels are the same size, the tyres are smoother and larger. The Tumbler's sides are built on sideways inbetween the wheels, aside from the flaps which are to the sides of the front ones. The sides are mostly smooth with stickers, but a vent and a slope near the rear-end add more texture.

The Bat is coloured mostly black but is also given blue highlights. The majority of the Bat's "body" is cockpit which is sloped in the front with one of Batman's logos stickered on. To the back of the body are two angled propellers. On the inside of the cockpit is a black control-panel piece often used in the Star Wars theme and occasionally in City. Batman sits behind it. There is a step behind the pilot-seat where there is room for a passenger. The cockpit has an angular transparent brown, windshield. Two "arms" sprout from the sides of the cockpit at the top which morph into turbines at the end. Two weapons are also mounted on each turbine, a flick-fire missile and a cannon each. The Bat's wings are mounted on top of the cockpit and are angled in a depressed "M". There are stickers, vents, and ridges on the wings and back to add shape and detail. The top slopes backwards, behind the cockpit where there is blue exhaust and a rope dangling down.

Two street barricades are also included. They are black with yellow stripes and lights.

Bane has a flesh head that is printed with an olive mask that is left open around his eyes and mouth. However, most of his mouth is covered with a silver apparatus. On the back of his head are two tubes. He wears an olive tactical vest with tan straps and belts and silver plating on both sides. Bane's arms and left hand are left exposed, but he wears a single black glove over his right. He has dark grey legs.

Batman wears a black cowl over his face with openings over his white eyes (achieved by a headband being printed above his actual eyes on the head below) and mouth. The brow is moulded into a permanent scowl and has two bat-shaped ears poking up. The expression revealed through the hole over the mouth is a frown or alternatly a large smirk. Batman also wears a black cape that is pointed at the end, black gloves, and a grey, armoured suit.

Commissioner Gordon has a tousled, dark brown hairpiece. He wears squared, black glasses and has a thick mustache above his mouth. He has nougat lines over his face to give it shape, such as trying to make it look thinner and wrinkled. He has two expressions, neutral and angry. He has a dark blue torso and matching arms printed with a grey S.W.A.T. vest. He has black legs and carries a gun previously used by Deadpool and in Alien Conquest.

In the set, Batman in the Bat and Gordon are chasing after Bane in a desert camouflaged Tumbler. The set is inspired by the film rather than based on it, however the set is similar to the chase scene near the end of the film where Batman in the Bat chases after Talia Al Ghul in the Tumbler.

The Tumbler first appeared in the film Batman Begins as the trilogy's take on the Batmobile. When Bruce Wayne went to Wayne Enterprises to gain crime fighting equipment, he acquired a shelved Wayne Enterprises military vehicle from Lucius Fox, called the "Tumbler", to serve as his transportation. The Tumbler was originally covered military desert camouflage paint, so Bruce asked Lucius Fox to have it painted black. Batman used the Tumbler throughout Batman Begins and into The Dark Knight where it was destroyed. Between The Dark Knight and The Dark Knight Rises, Lucius acquired three other Tumblers which he kept under Wayne Tower. When Bane broke in to Wayne Enterprises to steal a reactor that can be turned into a bomb, he also stole the three military Tumblers and used them to keep his hold on Gotham City.

The Bat (the trilogy's take on the Batwing) also came from Wayne Enterprises. Fox gave it to Bruce shortly before he returned to the Batman mantle. 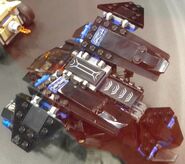 The Bat at New York Comic-Con

The Tumbler at New York Comic-Con 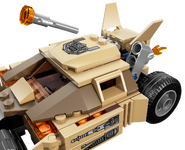 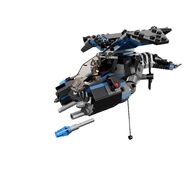