Brickipedia
Register
Don't have an account?
Sign In
Advertisement
in: Class 3 articles, Sets listed for ages 6-12, 76000 sets,
and 5 more
English

The set mainly concentrates of Nick Fury's S.H.I.E.L.D. car, Spider-Man's Spider-Cycle, some black globs of the Venom symbiote, and a white rope to act as one of Spider-Man's web vines.

Nick Fury's S.H.I.E.L.D. car is mainly green. The hood has a white S.H.I.E.L.D. eagle logo, and at the front of the car are a white license plate, some small translucent-yellow plates, and small sloped transparent bricks representing headlights. Lower down are some black sloped, grilled bricks and a smooth, flat black plate acting as the car's front bumper. The car uses a transparent brown windshield attached differently than in most sets; it lays on its side, with the studs facing forwards. The windshield element's studs attach to some long black and green plates also on their sides, which are in turn attached to the car. The car features no roof, and the seating area is large enough to fit Nick Fury. Inside is a steering wheel and some tan bricks acting as the seat. On each side of the seating area are some smooth green plates and, lower down, are some black sloped, grilled bricks and a smooth, flat black plate. The car implements some Technic elements to allow the four wheels to be folded inwards, which in turn allows the car to enter "flight mode". Behind the seating area is a plate on the side of which some triangular green plates are attached. The top of this plate is also covered with some smooth black tiles, some grey grill elements, and a black curved piece. This entire section can be raised to reveal a single flick-fire missile underneath. The missile itself consists of a grey body and a translucent-red, flat stud at the head. Further back on the car is a tail fin and, lower down, some translucent-red elements acting as lights.

Spider-Man's Spider-Cycle consists mainly of black, grey, and red pieces. Underneath the Cycle are some grey and black Technic elements attaching the four thin wheels (two at the front, side-by-side, and two at the back, also side-by-side) to the rest of the vehicle. Like Nick Fury's car, the Technic elements allow the cycle to convert into flight mode, but with the cycle, the four thin wheels fold outwards as opposed to inwards. On top of the Technic elements is a black plate that Spider-Man is seated on and to which the other pieces are attached. On top of this plate and at the front of the cycle are the cycle's handlebars and a light-grey sloped element. A red spider emblem is stickered on this element. At the back of the cycle is a small red sloped element.

The Venom symbiote globs are made using some black vine elements and some large black tooth elements attached to a one by one block with a hole on each side.

Venom has taken control of Nick Fury's car, while Spider-Man races to help on his Spider-Cycle, while avoiding symbiote bombs.

The S.H.I.E.L.D. car is Fury's personal car that has featured briefly in the show.

The Spider-Cycle was invented by Dr. Curt Connors and given to Spider-Man when he joined S.H.I.E.L.D, made to reduce the use of the expensive web fluid, and to save strength. The Cycle has the abilities to shoot a line of web to ride on, climb up vertical surfaces and ride across buildings, auto-pilot and a military scanner, split the tires to ride train tracks and also fly. At first Peter couldn't ride it very well and caused massive damage but eventually mastered it. While the Spider-Cycle is mostly used by Spider-Man, it was briefly used by White Tiger and Captain America and briefly taken control of by Electro. It was destroyed by the Green Goblin in a fight, but he later received a new one.

Spidey's web attached itself to Venom 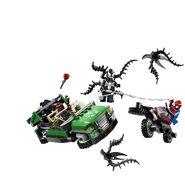