Brickipedia
Register
Don't have an account?
Sign In
Advertisement
in: Class 2 articles, Sets listed for ages 6-12, 76000 sets,
and 5 more
English

The set is made up of two main parts: the DBC building and the Doomjet.

The DBC building has three levels and a roof. The building is mostly coloured tan with bits of dark tan, green, dark red, black and grey. Along the left side there is an escape ladder with a green door on every level. On the first floor, there's two large trans blue doors and above that is an arching sign that says "DBC". On the left is a trans blue window on every level. On the second, it's all windows, broken up by bits of wall and one of the windows can be blasted out. On the right there is a white web. The third floor has a large screen made up of smaller ones, showing Jameson angry clutching a paper and "Who is Spider-Man?" scrolling across the bottom. Other than the screen, the third floor is the same as the second. The roof consist of a large brick built sign with the letters D, B, and C on separate tiles. On the top is a long antenna, to the right is a satellite and the left a black rounded piece. There is a trapdoor on the roof. All over the building there are places where Spider-Man web can attach to.

In the interior, the first floor is bare except for a brown two by two round brick and leaf piece making a potted plant. On the second floor, there is a desk near the destructible window and on top of it is a light and a newspaper (that also appeared in 6858 Catwoman Catcycle City Chase). Next to the desk is a corkboard featuring multiple attempts to take a picture of Spider-Man, along with a picture trying to figure out Spider-Man's identity showing half of an unknown face and the other half of his mask surrounded by question marks. By the corkboard, is a spinning dark green chair. In between the second and third there is a lever to destroy the second floor left window. The third floor has a large brown desk, with a computer, lamp, and a spinning dark green chair. Behind the sign on the roof is a push lever to destroy part of the DBC sign. There also is another lever designed to push someone of the roof.

Although not attached to the model there is a green dumpster and a black street lamp included.

The Doomjet features a big cockpit cover in transparent brown and the cockpit can only hold Doom. On the front there are red lights and red flick fire missiles on either side of the cabin. Behind the cockpit there are wings extending out with the Latveria symbol and ending in propellers that can rotate 360 degrees. At the back are adjustable tailfins and extending from the bottom of the jet is rope ending in an adjustable grabbing device to capture Jameson.

The set features many elements from the Ultimate Spider-Man TV show and is similar to the episode Beetle Mania. 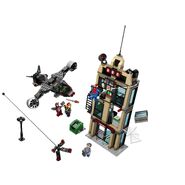 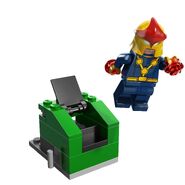