This main feature of this set is a small buggy with a flamethrower and flick-fire missiles attached to a rotating crane arm and a gun attached to the side. It includes Iron Man and The Mandarin minifigures in their Mark 17 and Robeless variants respectively, the former having trans-blue cylinders and studs for jets and repulsor blasts, and the latter driving the buggy.

The set is based on Iron Man 3. However, nothing resembling that battle depicted in this set occurs at any point in the film. 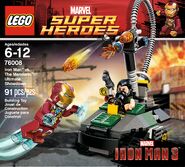