Brickipedia
Register
Don't have an account?
Sign In
Advertisement
in: Class 4 articles, Sets listed for ages 6-12, 76000 sets,
and 7 more
English

The set includes a redesigned version of the Batcopter, in addition to a glider for Nightwing. The Batcopter has slightly changed from the version from 2007. This version has the yellow highlights seen in Batman's vehicles in the DC Universe Super Heroes theme, in addition to it being somewhat smaller. The set replaces the spring cannon and rack of two Flick-Fire Missiles with one Flick-Fire Missile on each side. The rotors on the top have been changed from three to two normal and two smaller rotors. A winch has been added to the model. Nightwing has a glider with a colorscheme of black and red, and is shaped like "The New 52" version of Nightwing's logo. However, the glider does not appear to be based on any of Nightwing's vehicles that have appeared in comic books at this point. It appears that grappling hooks can be fired from the glider by flicking them. 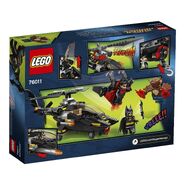 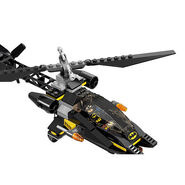 $49.99 +
Released
December 1, 2013 (US) +
ShopDescription
Join the fight as Batman battles to sav … Join the fight as Batman battles to save Nightwing from Man-Bat!<br>As Nightwing patrols Gotham City in his glider, he spots Man-Bat planting some dynamite! Strap Batman into the ultra-fast Batcopter, fire up the powerful engine and zoom over to help his friend foil Man-Bat’s attack on the city. And if Nightwing gets into trouble, lower the Batcopter’s working winch and hook and tow the glider to safety. Includes Batman, Nightwing and Man-Bat minifigures with assorted weapons.*Includes Batman, Nightwing and Man-Bat minifigures with assorted weapons*Features Nightwing’s glider with grapples and Batcopter with opening cockpit, spinning rotors, 2 flick missiles and a working winch and hook*Weapons include a Batarang and 2 dynamite sticks*Attach the hook to Nightwing’s glider and lift him to safety*Dodge Man-Bat’s explosive dynamite*Fire the flick missiles and stop Man-Bat’s dynamite attack*Batcopter measures over 3” (9cm) high, 11” (30cm) long and 3” (7cm) wide*Glider measures over 2” (6cm) long and 3” (9cm) widesures over 2” (6cm) long and 3” (9cm) wide +
Theme
Super Heroes +
Title
Batman: Man-Bat Attack +
Txt1
Batman +
Txt2
Man-Bat +
Txt3
Nightwing +
Type
Set +
USPrice
$19.99 +
Advertisement