Batman
The Flash
The Riddler

76012 Batman: The Riddler Chase is a DC Universe Super Heroes set released in 2014. Batman and the Batmobile designs are based on their appearances in Beware the Batman. 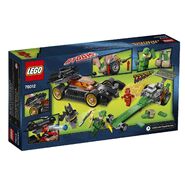