Brickipedia
Register
Don't have an account?
Sign In
Advertisement
in: Class 2 articles, Sets listed for ages 6-12, 76000 sets,
and 5 more
English

The set features an olive green and yellow HYDRA tank, seen in LEGO Marvel Super Heroes, and a dark red motorcycle for Captain America. The tank has eight wheels, and seems to have some type of suspension system. Also, the tank has two cockpits; one cockpits holds Red Skull and the steering mechanisms, and another for the Hydra Henchman, equipped with flick-fire missiles and an antenna. The HYDRA tank is built with numerous sloped bricks.

Captain America's motorcycle appeared in 2012, but he is given another one in this set, though this time the cycle is similar to the one used by Mac McCloud in the set 7306 Golden Staff Guardians. 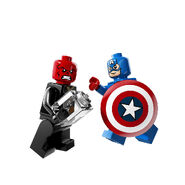 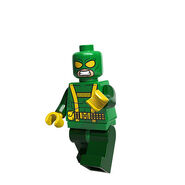 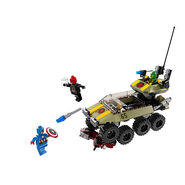