Brickipedia
Register
Don't have an account?
Sign In
Advertisement
in: Class 2 articles, Pages that link to Legopedia (Russian), 76000 sets,
and 5 more
English

76025 Green Lantern vs. Sinestro is a 174 piece DC Universe Super Heroes set that was released in January 2015. It includes Green Lantern, Batman, and Sinestro.

The main part of the set is the Green Lantern jet which is coloured mainly green, black and includes trans-green highlights. The front is in three main sections, one being the cockpit, and the others are curved sides where the wings end. The cockpit is set upfront with a white pilot chair. The jet features a rounded transparent green canopy with a Green Lantern logo printed on a black slope in front of the jet. The wings are green with a 1x3 slope piece and a new stud shooter element that seems to connect to another stud rather than have a handle. The back features an exhaust with 1x2 grilles that are black and lime green. The jet has two large flaps on the back which are trans green.

Another section of the set is the Containment Tube. It features a transparent window and a holder for the Lantern to be put inside of it. The rest of the construct is yellow and black. It's feature is made by hitting the Sinestro Corps symbol on the top. When the symbol is hit, the front of the tube "breaks" off, revealing the Lantern.

Green Lantern has a dark brown hairpiece which was previously used on Commissioner Gordon, and Tor-An in the DC Super Heroes line. His face has nougat lines for cheekbones and a green domino mask with dark green highlights, and has a grinning expression. He wears a tight green shirt with black detailing depicting his muscles cut into his suit, his lantern symbol, and black sleeves. He has white gloves, black hips, and green legs that depict black printed boots on them. His appearance is based off of his New 52 design.

Batman wears a new silver cowl over his face with openings over his orange eyes and mouth and chin. The brow is moulded into a permanent scowl and has two shorter bat-shaped ears poking up. The expression revealed through the opening over the mouth is a breathing mask. Batman wears a bulky costume with space gear, this time the suit is white. A yellow oval is one his chest with a black batsymbol inside. He wears a white utility belt with a hexagonal buckle and a high tech packet on either side. He has light grey gloves and hips. He has a Jetpack connected by a transparent white connector. The "Cape" is supposedly made of a thin plastic to achieve wings. They can unattach and be replaced by a new cape.

Sinestro uses a black hairpiece that was also used on Joker, but in Green. His face is a dark pink and has purple cheekbones. Sinestro features a thin black mustache, yellow eyes and an angry expression. He wears a tight yellow shirt with black detailing, his lantern symbol and black sleeves. He has yellow gloves, black hips and yellow legs with black upper leg printing depicting yellow boots.

The set depicts Sinestro capturing Green Lantern's power source in a Containment Tube of his own creation, and Batman aiding Green Lantern using a jet constructed from the power ring. 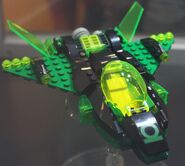 x12px $49.99 +
Released
January 1, 2015 +
ShopDescription
Zoom into orbit and recover Green Lante … Zoom into orbit and recover Green Lantern’s lantern!</br></br>Sinestro has stolen Green Lantern’s lantern and whisked it away to his home planet of Korugar. Launch a recovery mission with Green Lantern, in his ultra-fast construct spaceship and super-jumping Space Batman™! But evil Sinestro has built a cage around the lantern and is guarding it with his staff. Fire the 2 powerful stud shooters and turn the rear control to activate 2 devastating spring-loaded shooters. Spring into action with Space Batman™ on the Super Jumper to topple Sinestro and explode the cage. With victory assured, leap out of the cockpit and reclaim the lantern! Includes 3 minifigures with accessories: Green Lantern, Space Batman™ and Sinestro.</br></br>*Includes 3 minifigures with accessories: Green Lantern, Space Batman and Sinestro</br>*Construct spaceship features an opening cockpit, 2 stud shooters, 2 spring-loaded shooters with rear control and translucent green elements</br>*Cage features a plinth for the lantern and explode function</br>*Accessories include Space Batman’s space wings and exclusive new Super Jumper and Sinestro’s translucent yellow power staff</br>*Green Lantern, Space Batman and Sinestro are all-new LEGO® minifigures and exclusive to this set!</br>*Place Green Lantern in the cockpit and launch into orbit</br>*Gear up Space Batman with the cool space wings</br>*Target Sinestro with the dual stud shooter</br>*Turn the rear control to activate the spring-loaded shooters</br>*Spring open the cage with Space Batman™ on the Super Jumper!</br>*Reclaim the lantern and place Sinestro in the cage</br>*Construct spaceship measures over 1” (4cm) high, 7” (18cm) long and 6” (16cm) wide</br>*Cage measures over 4” (11cm) high, 1” (4cm) wide and 1” (4cm) deep1cm) high, 1” (4cm) wide and 1” (4cm) deep +
Theme
Super Heroes +
Title
Green Lantern vs. Sinestro +
Txt1
Green Lantern +
Txt2
Batman (Space Suit) +
Txt3
Sinestro +
Type
Set +
USPrice
$19.99 +
Advertisement