Brickipedia
Register
Don't have an account?
Sign In
Advertisement
in: Class 2 articles, Sets listed for ages 6-12, Pages that link to Legopedia (Russian),
and 5 more
English

Clash of the Heroes

76044 Clash of the Heroes is a 92 piece DC Comics Super Heroes set released in 2016 based on the Batman V. Superman: Dawn of Justice movie. It includes Batman and Superman.

The set includes the top of the building in which Superman battles Batman in Batman V. Superman: Dawn of Justice.

The building consists of 92 pieces. It includes a Bat-symbol stud launcher, and a function to launch Batman. It also include a green box with kryptonite inside. Minifigures include an armored Batman with a kryptonite stud launcher, batarang, and grappling hook; and Superman with a Super Jumper. Batman's eyes can glow in the dark

During the conflict between Batman and Superman, Batman went to the rooftop of an abandoned bulding and lit his Bat-Signal. Soon, Superman, who had been blackmailed by Lex Luthor, came to fight Batman. Batman launched kryptonite gas at Superman, repeatedly almost killing him. 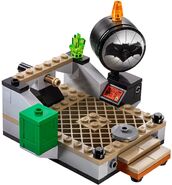 $12.99 +
Released
2016 +
ShopDescription
Armored Batman™ has glow-in-the-dark eyes … Armored Batman™ has glow-in-the-dark eyes and is firing his bazooka. Knock down the barrier with Superman’s Super Jumper and explode the Bat-Signal. But beware—Armored Batman could launch from the rooftop at any moment! Who will win the Clash of the Heroes? Only you can decide!</br></br>*Includes 2 minifigures: Armored Batman™ and Superman™.</br>*The skyscraper rooftop minibuild features a rotating and exploding Bat-Signal, a detachable barrier, Armored Batman™ minifigure launch stick function, and translucent elements.</br>*Weapons include Armored Batman’s silver Batarang and his 3-in-1 buildable stud-shooting bazooka weapon, which can be converted into 2 smaller guns: a stud-shooting gun and a grapple hook gun.</br>*Activate Superman’s Super Jumper to knock down the rooftop barrier.</br>*Armored Batman™ has glow-in-the-dark eyes and comes with an armored suit.</br>*Also includes a comic book!</br>*Skyscraper rooftop minibuild measures over 4” (11cm) high, 4” (12cm) wide and over 7” (18cm) deep.h, 4” (12cm) wide and over 7” (18cm) deep. +
Theme
Super Heroes +
Title
Clash of the Heroes +
Txt1
Batman +
Txt2
Superman +
Type
Set +
USPrice
$12.99 +
Advertisement