The set is includes the Batmobile, Batman, 2 LexCorp henchmen, and a LexCorp Forklift. 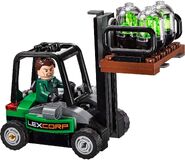 Lexcorp forklift
Add a photo to this gallery