Crossbone's truck was an escape vehicle used in Crossbone's attempt to steal a biological agent in Lagos. However, he was intercepted by Black Widow, Falcon, Captain America and Scarlet Witch, stopping him. He commited suicide and the truck was presumably impounded. 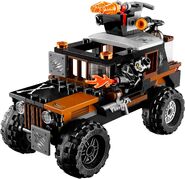