Drive the villains out from Batman’s Batcave!

Help Batman™ and Robin™ to drive the villain intruders from the Batcave, featuring a Bat Lab with Batcomputer, plus the Batmobile with stud shooters, Batcopter with flick missiles and the Batcycle. This special model, based on the classic 1960s TV show, also has a Wayne Manor section with an exterior wall to climb on and Bruce Wayne’s study featuring the iconic Batphone and a false bookcase that slides open to reveal the secret entrance to the Batcave. Before spiraling down the Batpoles into the Batcave, change identity from Bruce Wayne™ and Dick Grayson™ into Batman and Robin (separate minifigures included). 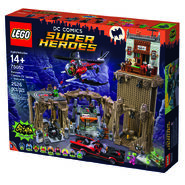 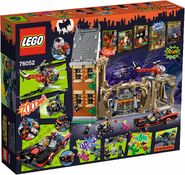