76060 Doctor Strange's Sanctum Sanctorum is a Marvel Superheroes Set in released in 2016 to coincide with the film Doctor Strange. It includes Doctor Strange, Baron Mordo and The Ancient One. 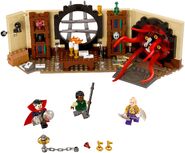