This Justice League set includes 4 minifigures: Batman, The Flash and two Parademons. It also comes with the Knight Crawler, a Black Engin tracked with jointed legs driven by Batman, and a grey Motherbox. 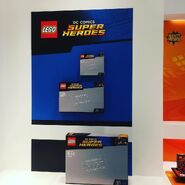 The prototype box of the set.
Add a photo to this gallery