Together with the Avengers, start the fight for the Infinity Gauntlet !

Shoot at Thanos from the ship’s thorns. Open the cockpit and attack the space bike along with Star Lord and Gamora.

Avoid the blows of Thanos’s huge sword and use the Iron Man’s power units to defeat the mad titan . Having won, grab the Infinity Gauntlet and fly away. 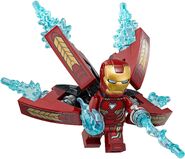