Batman: The Attack of the Talons

The set contains Batman and Ace the Bathound, as well as two Talons. Batman is driving a three-wheeled heavy duty buggy-like vehicle, with large wheels, a streamlined black body, and multiple yellow bat-shaped pieces. The vehicle has two missiles on either side, and a sticker on the front. It also has handlebars, and the yellow bat pieces are placed on the wheel as well as the front of the car. 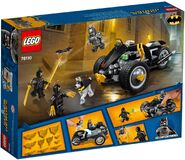