Brickipedia
Register
Don't have an account?
Sign In
Advertisement
in: Class 3 articles, Sets listed for ages 18+, 2020 sets,
and 4 more
English

The Mark XLII (Mark 42), known by its code name "Extremis" or the “Prodigal Son” is an Autonomous Prehensile Propulsion Suit Prototype was the forty second armor, as well as one of the many newly built suits, created by Tony Stark sometime after the Battle of New York.

It was the armor that Iron Man wore during the Extremis incident, and was used until he trapped Aldrich Killian inside and had it self destructed.

The suit is well known for its special ability to fly in separate pieces and wrap itself around Tony's body, piece by piece through 49 "state-of-the-art" computer chips that was implanted in his arms called "Micro-Repeaters", which enables him to communicate with his armor. 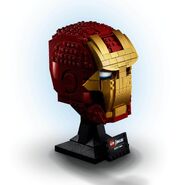