Brickipedia
Register
Don't have an account?
Sign In
Advertisement
in: Class 3 articles, Sets listed for ages 8+, 2021 sets,
and 4 more
English

76239 Batmobile Tumbler: Scarecrown Showdown is a DC Comics Super Heroes set that was released on October 1, 2021. It's based on the movie Batman Begins, the first installment of The Dark Knight Trilogy. 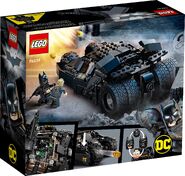