7656 General Grievous' Starfighter is a Star Wars: Revenge of the Sith set released in 2007, under the Star Wars: 30th Anniversary line.

The set consists of the ship known as the Soulless One, which is the personal straighter of General Grievous throughout the Clone Wars and one Minifigure, General Grievous. The ship features an opening cockpit, which slides open and has room inside for Grievous, moving gun turrets and a retractable landing fin. On the underside of the fighter, there is also a rack containing Grievous' four Lightsabers. 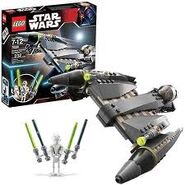