7676 Republic Attack Gunship was released on July 26, 2008 as part of the LEGO Star Wars: The Clone Wars line. This set consists of 1,034 pieces used to build the Gunship itself, the small Speeder Bike, or the 74-Z Speeder, a small, removable Command Center (similar to the one released in the new 2010 Clone turbo Tank), Bacta Tank, and spy droids. There was an earlier version of the gunship released, 7163 Republic Gunship, released in 2002 under the Star Wars Episode II: Attack of the Clones line. The ship is used mainly as a transport for troops and is equipped with some weapons. Included are Obi-Wan Kenobi (Clone Wars), Plo Koon, Asajj Ventress, Commander Cody, and Clone Trooper minifigures. In the Star Wars universe, the ship is also known as a Low Altitude Assault Transport/infantry (or LAAT/i).

The Republic Attack Gunship's most notable features include the opening troop bay doors on either side of the model, removable command centre for the minifigures the 74-7 Speeder, and the other opening doors and storage compartments throughout the ship. The ship sits on a flat base, and has the ability to have its side bay doors (both upper and back on either side) opened. The larger, back halves of the doors can be opened using the small "handles" provided by the overhang of the bracket used to attach them to the rest of the ship. These doors provide access to the main interior of the ship, or the "troop bay". It is in here that the speeder is stored during flight. The speeder rests against a small rack in the centre of the bay, which also holds the minifigures' weapons, and rests on top of the back door. The back door can be lowered to give the speeder the ability to leave through the back of the ship without opening up ether of the side doors. Slightly above the troop bay on both sides are four small "locker-like" cabinets used to store additional supplies (such as electrobinoculars or ARC Trooper gear). These are built into the structure of the ship and cannot be removed.

At the front of the ship under the forward cockpit, reside two large anti-personnel laser turrets which have the ability to rotate in a wide degree of angles due to their rotation on a ball. There are two of these weapons at the front of the ship, and one at the back above the speeder's back access door. Not included in the set, are the Bubble turrets manned by two Clone troopers, usually found on either side in front of the troop bay. These turrets are present at the ends of both wings as they should be, but are strangely absent from the troop bay. According to specifications of the Gunship itself in the Star Wars universe, the front troop bay doors (as found on this ship) were sometimes removed at replaced with two more bubble turrets for added firepower. In between the two large missile launchers located at the top of the ship where the two wings attach, are twelve flick-fire missiles. These are separated into two rows of six and can be moved side-to-side on their brackets.

This version provides some noticeable changes over the older version from 2002, in addition to some improvements. For example, the older model, did not have an actual seat under the bubble turret cover on the wings, but in the newer model, minifigures can be seated with their own computer in each of the two turrets. Also unlike the original, the two bubble turrets at the front of the troop bay were removed and replaced by two doors, which meet with the back doors to completely shield the entire troop bay from enemy fire. Some less noticeable changes include the addition of the speeder bike mechanism, Bacta Tank, command centre, change in supply cabinets' form factor, and removal of the "engine" from the upper compartment. This gunship was given more room for accessories especially in the lower front, whereas the original split open to reveal a much larger, more integrated command centre, and removable top section of the ship.

Slightly ahead of the troop bay is the compartment for the Bacta Tank. The tank itself consists of large round, clear blue sections to give the effect of a glass tube. The top half of the tank is hinged, allowing for a full minifigure to be easily placed inside. The tank is removed by lifting the two small covers at the top on either side, so "unlocking" the tank from is locked, in-flight position. In addition to the Bacta Tank, up at the front of the Gunship, is the removable Command Centre. This accessory is hidden underneath the large panels with the nose-art. Either of the two panels can be lifted to reveal a small compartment with a place to store the centre. The command centre itself consists of a place for two of the minifigures to sit, a lever/antenna, and a computer screen which can be raised or lowered. In order for the centre to fit inside the front of the gunship under the main cockpits, the lever and computer must first be folded up into itself to make it lower. Under the top of the ship is yet another door. This door, when lifted, reveals another small storage area, directly behind the main cockpits, which holds the spy droids, which are similar in appearance to Sith Probe Droids. These droids are grey in colour, and are utilized by the Republic for scout missions or in situations too dangerous for actual troopers. There are two of them included in the set, and both fit under the top door. The speeder bike is small and sleek, but still comparable in design to the older models of included in sets from 1999 like 7128 Speeder Bikes, for example.

An interesting point of this set is its architecture and design. When building the set, the ship is build into four sections which are then connected at later stages of the build. It is built into the troop bay, lower front section (consisting of the housing for the forward guns, and command centre), the upper half which consists of the main cockpits, spy droid storage, and will hold the wings, and the wings. At various stages, these four parts are all connected and attached to each other to assemble the finished model.

This set includes two special decals that can be placed on the large plate underneath the front cockpit. These can be used to customize the gunship to be either the Crumb Bomber, a ship with a Kowakian Monkey Lizard with the phrase "Laugh This Off" in Aurebesh on the side, or the Lucky Lekku a ship with a female Twi-Lek dressed with Clone Trooper armour on the side (and Aurebesh saying "Lucky Lekku"). Both of these decals would be placed on the large plate covering the command centre module. LEGO also included two sets of special decals, much similar to these in the 2009 UCS set; 10195 Republic Dropship with AT-OT, allowing users to customize the look of their dropship, just like their gunship.

The LAAT/i was used by the Grand Army of the Republic during the The Clone Wars mostly for air support and troop transportation. It was capable of carrying up to thirty troops, or four speeder bikes in the back infantry bay. The ship had its own fully-armed weapons platform packing three anti-personnel laser turrets, two top-mounted mass-driver missiles, four composite-beam, pin-point laser turrets, eight air-to-air missiles on the underside of each wing, and several more various grenades and bombs. The gunships were often customized by their crews who often painted a design on the nose of the ship, known as "nose art", seen most notable on the Crumb Bomber. Several variations of this vehicle were also produced, most of which were modified versions capable of carrying other large vehicles into battle, such as the AT-TE and Clone Turbo Tank. During the latter stages of the Clone wars, when the Empire began to take over, the Imperial Army utilized the remaining gunships for a short while. 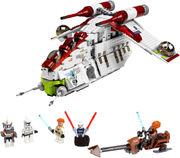 The upper compartment for the spy droids.

The removable command centre itself.

The mechanism for "locking" the Bacta Tank.

A gunship in The Quest for R2-D2