The set 7678 Droid Gunship was released on July 26, 2008 as part of the LEGO Star Wars: The Clone Wars line. Included in the set are three Battle Droid Minifigures.

The Droid Gunship is mostly dark blue and grey and made up of two main parts: The body and the cockpit. The main body dominates most of the set. It is large and circular, with blasters and missiles underneath clustered on each side. In the center of the hull is a mechanism that, at the turn of a gear, drops 6 "bombs" from the bottom. The gunship also has retractable landing gear.

The bridge protrudes from the front and has twin blasters mounted on ball joints on either side. A single blaster is located in between these in the center. the cockpit can open and close to accommodate the Battle Droid piloting the craft.

Also included are three battle droids: two that have two arms with vertical hands to hold guns, which are included, and one with two normal arms to pilot the gunship.

The underside of the Gunship 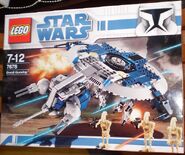