7682 Shanghai Chase was released between December 2008 and January 2009 across the world as the first of two sets in the LEGO Indiana Jones and the Temple of Doom line. It includes 244 pieces and 5 minifigures. 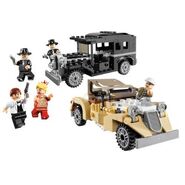