"This is the Big Bad of the Alien fleet. We still don't know what it came from or what it wants, except to take our crystals and drive us off the planet. Extremely powerful and extremely dangerous!"
―An unknown astronaut

The ETX is the Aliens' main and most powerful ship. The mothership itself can separate and divide itself into four different crafts. It would fire a missile when you pulled the trigger located on the handle underneath the ship. The set also includes an Astronaut defense station with a drill and a pump system that can fire 4 soft foam 'missiles'. The set includes 2 Astronauts and 5 Aliens.

Description from The LEGO Book 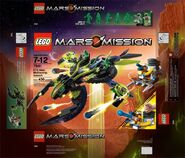 $69.99 +
Released
2007 +
ShopDescription
Beware the Alien Mothership! It's t … Beware the Alien Mothership!</br></br>It's the ultimate 4-in-1 alien strike ship! With its advanced weaponry, firing missile and three detachable attack vehicles, the giant ETX Alien Mothership will stop at nothing to steal energy crystals from the Mars Mission team. Can the astronauts fight back with their defense station's launching air-powered missiles? </br>*Includes separating Alien Mothership, defense station, air pump system and 4 foam missiles that are safe for play!</br>*Includes 2 astronauts and 5 glow-in-the-dark alien minifigures!</br>*Push down on the air pump system to fire the foam missiles!</br>*Move the drill back and forth to find energy crystals!</br>*Alien Mothership has a launcher that really fires!thership has a launcher that really fires! +  and " The aliens' ultimate attack vehicle incl … " The aliens' ultimate attack vehicle included five glowing alien warriors and could split apart into a command saucer, two scout ships, and a strike fighter. To combat it, the set came with a defence station with two astronauts and pump-blasted foam missiles."stronauts and pump-blasted foam missiles." +
Theme
Space +
Title
ETX Alien Mothership Assault +
Txt1
Alien +
Txt2
Alien +
Txt3
Alien +
Txt4
Alien +
Txt5
Alien +
Txt6
Gunner +
Txt7
Miner +
Type
Set +
USPrice
$49.99 +