"The MX-71 has hauled us out of more trouble times than I can count. Nothing's better at getting in and out of a hazard zone in an emergency."
―Unknown astronaut

The mining rover can attach to the bottom of the dropship. The alien attack ship is the miner for the Aliens in the Crystalien Conflict online game. 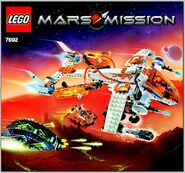 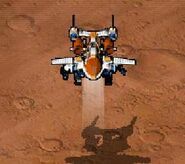 The dropship in Crystalien Conflict